Having been blessed with days of sunshine, which allowed us to enjoy some fantastic panoramic views atop Skiddaw and Helvellyn, rain finally descended the last morning of our week-long stay in the Lake District. Driving through the misty rain, we arrived in Grasmere late morning. Our plan was to visit the National Trust’s Allan Bank, which counted William Wordsworth and Hardwicke Rawnsley (one of the National Trust founders) as its former occupants.

Being very close to the centre of Grasmere, Allan Bank itself does not offer parking. Instead, we left our car in a layby (marked ‘P’) along the A591 and walked 300m or so towards the village centre, through a footpath. Grasmere itself is a melting pot of sorts: come rain or shine, you’ll find streams of D-of-E students, seriously geared-up hikers and immaculately dressed day-trippers all jostling for space on the narrow pavements that run the length of the village.

Having walked through the village and along a short gravel path that rose gently uphill, we arrived, drenched, at the Allan Bank estate. Outside the entrance of the house was a sign that read: “dogs and their well-behaved owners are allowed in the house”. It made us chuckle! We dried ourselves off the best we could, and entered the house.

Immediately, it felt as if we’d arrived home. Indeed, Allan Bank is quite different from many other National Trust properties; the steward who welcomed us explained that we should literally make ourselves at home. Most of the rooms are open to visitors; we could help ourselves to tea and coffee in the kitchen (donations welcomed) and then just wander around the house any way we like. On the ground floor were a number of cosy rooms: we saw a couple sitting around reading newspapers in one; kids doodling and earnestly making crafts in another; a dog (and its well-behaved owner) making its way up the stairs.

Some of the rooms in the house were themed. Some had informative displays on the life of one of its inhabitants, Hardwicke Rawnsley [who, as far as we could tell, did not do very well in his intended vocation as a missionary. Luckily, he found his other calling: to conserve historical places and natural landscapes for the public (and, in doing so, possibly became a nuisance to many a private landowner); in fact, Rawnsley went on to found the National Trust]. One room doubled up as a superb library of mountaineering books and photos.

The armchair in the mountaineering library was massive!

At one point, we looked out of a lovely bay window and saw that the rain had eased; the clouds beginning to disperse. Promptly, we headed outside to explore the small but lush wood surrounding the house, which had been beautifully landscaped to reveal to those walking through it glimpses of the majestic lake of Grasmere. The sight of red squirrels scurrying from one tree to another was also quite a delight. 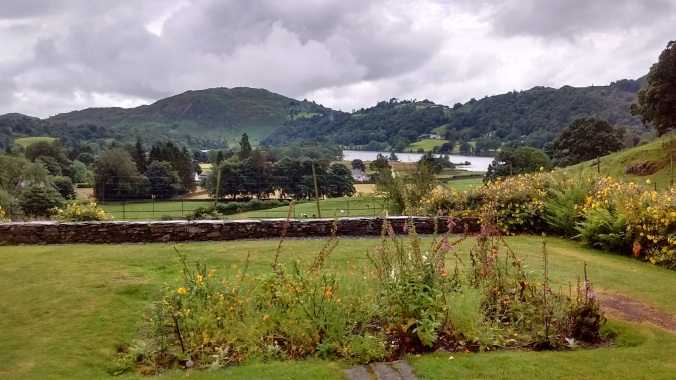 As the sky began to brighten, we decided to leave Allan Bank and follow a footpath we had seen on our map, which would take us up to Easedale Tarn.

This second part of our Grasmere excursion began first as a leisurely stroll along Easedale Beck, past grazing sheep and cows, with Helm Crag towering defiantly above the north-eastern side of the valley. 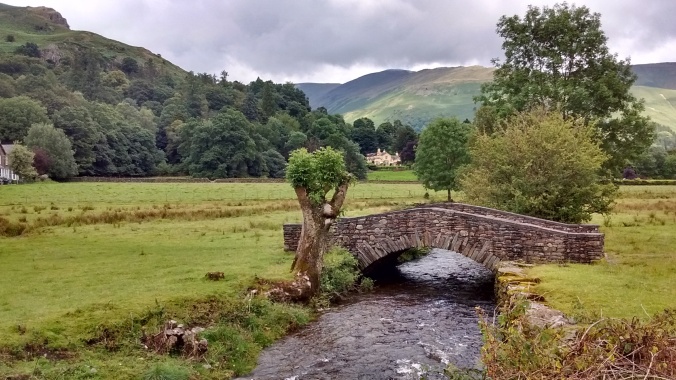 A footbridge over Easedale Beck

Accompanied by the sounds of the rushing river water, we continued to follow it upstream. Soon we saw a silver waterfall in a distance; we entered an area known as the Sour Milk Ghyll. The terrain became rougher, the path narrower and windier, as the gradient steepened. The rumbling of the waterfall also became louder.

After another half a mile of (steady but gentle) ascent, we reached a sort of plateau. There was, however, no sign of the tarn. We continued to follow the path, twisting this way and that, and nothing could prepare us for the surprise that was to come.

We emerged from a corner, then, all of a sudden, the thundering sound of the rapids disappeared: right in front of our eyes was the most beautiful tarn* we had ever seen.

The surface of the tarn was mirror-like – with occasional ripples caused by ducks swimming past – and the water was crystal-clear. There were only a handful of other people by the edge of the water. Given that we were only a couple of miles from the hustle and bustle of Grasmere, this was absolute bliss.

Where the water starts its journey downstream

After spending twenty minutes or so relaxing by the tarn and thoroughly enjoying the sheer beauty and the relative solitude, we retraced our steps to head back into Grasmere. Within minutes of leaving the tarn, it disappeared completely from our view, like some magical place that only exists in our dreams.

As we made our way back down the hill, I could not help but reflect upon Hardwicke Rawnsley’s vision: to “defend” the Lake District from falling into private hands and from being ruined by industrial activity. Of course, mountains and lakes had existed (and their forms changed) for thousands of years before Rawnsley started his campaign. The idea that a natural landscape requires “defending” by us mere mortals does seem a little bizarre, given that the former is supposed to be ever-changing, and that nature will always have a way of reclaiming the landscape and re-asserting itself over time. However, the truth is, without the tireless work of those looking after and raising awareness of our beautiful countryside, the majority of us would never have a chance to know about these places, let alone enjoy them.

* in our opinion, even more so than Innominate Tarn, sorry AW!