A GPX file of the run can be downloaded from https://www.strava.com/activities/976298859

There are many ways to explore a city as a tourist. You can check out the sights whilst sitting on an open-top bus; you can join a guided walking tour; you can follow the instructions and maps in your guidebook; you can wander aimlessly, soaking up the sights and culture as you go. Or, as we discovered during a recent holiday in Valletta, you can get to know a city through the soles of your running* feet.

(*We know running is not rambling, but since it also involves using one’s legs, we’ll include this in the blog!)

At 80km2, Valletta – the capital city of Malta and the southernmost capital of Europe – is the smallest national capital in the European Union by area. Built by the Knights of St John in the 16th century, Valletta is a Unesco World Heritage Site, as well as European City of Culture (for 2018). We had read that a loop of this fortified city is only 5km, so we thought it would be a good idea to get up early the following day and combine a morning run with a bit of sightseeing, and to scope out the area we would be staying in for the next few days.

Well, we didn’t manage to get up until 8:30 the following morning (it was our holiday, after all!). Thirty minutes later, we set off from our apartment in Floriana (a small town located 1km outside Valletta). The sun was already out but the heat wasn’t too intense, with the temperature being around the low 20°C. From Floriana, we headed southeast through a series of narrow residential streets, in the direction of the Sir Luigi Preziosi Gardens. We had initially hoped to go down to Pinto Wharf (aka Valletta Waterfront) and run along there, but we couldn’t find any stairs or paths that would take us down from Sir Luigi Preziosi Gardens. Instead, we skirted King George V Recreational Grounds, running alongside some light traffic down Crucifix Hill, past a few horse-drawn carriages (known as Karozzin) parked by the roadside – their drivers still sleeping (since there were very few tourists about) – until we reached Lascaris Wharf (above which you’ll find the entrance to the Lascaris War Rooms, an underground complex of tunnels and chambers served as Malta’s War Headquarters during WW2).

Crossing the road and sticking close to the shoreline at water level, we now found ourselves moving along Barriera Wharf. We whisked past The Harbour Club, a restaurant and bar, then a series of houses/storage spaces (the shallowest buildings we have seen in our lives!), before reaching a disused fish market (originally built in 1937). 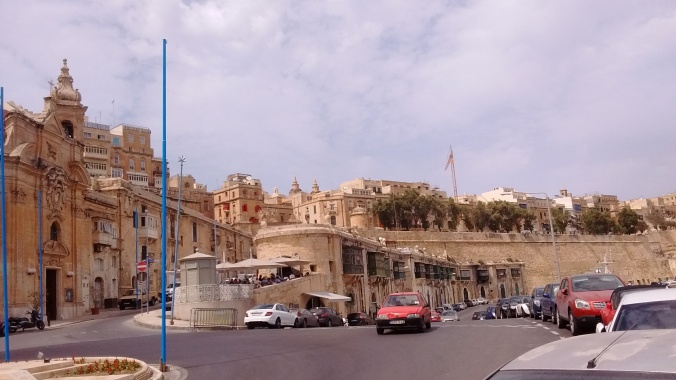 The Harbour Club in the centre

Look how shallow these buildings are! 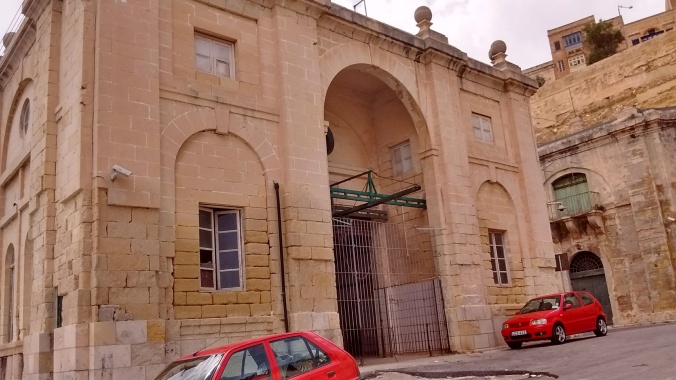 Entrance to the now disused fish market at Barriera Wharf

I managed to take this photo of the inside of the fish market by slotting my phone-camera through the gate grill!

Although this particular fish market is no longer in use, the wharf still seems to function as a landing place for local fishermen. We saw a few small boats moored there, where workers were busy loading boxes of fish onto lorries parked nearby (no doubt close to finishing their morning’s work); the fishermen stopped briefly to greet us as we ran by.

Past the fish market, we had to shorten our strides to tackle the short climb up to the majestic Siege Bell War Memorial. Being strategically located, Malta bore the brunt of the Nazi attack during WW2, and 7000 people lost their lives during the siege. Spotting an opportunity to hit the shoreline again, we turned right down a flight of stairs into an higgledy-piggledy area of local boathouses; it was relatively early in the morning, but already a few people were sunbathing, fishing, swimming.

The stairs that led us down to the boathouses

Looking back behind us, the Siege Bell War Memorial stands alone, with the Lower Barrakka Gardens beside it (and some boathouses in front)

We continued to stay close to the sea, running along an unpaved rocky path, until we reached the bottom of Malta Experience / Fort St Elmo, where the path we’d been following ended abruptly and we had to rejoin the main road.

At this point, it was getting hot – there were a lot of cars on the road so the air was not the freshest or the cleanest. So we decided to turn inland: the ubiquitous clusters of elegant baroque buildings that made up the heart of Valletta should provide some respite. But first we had to do one final bit of uphill jogging: this old fortified city is perched on a hill, and many of the side streets leading up to the core of the city from the harbour front are pretty steep and slippery (this, of course, is not obvious when you look at a map; but it’s something you’ll notice when you get there, and your legs will certainly feel it!). We ran up a flight of steep steps that took us to St Pauls Anglican Cathedral, and on to Old Theatre Street, from where it was a jog through the old city as people began their daily business.

Everywhere you go in Valletta, you are surrounded by these honey-coloured stone buildings, with the iconic Maltese balconies

We followed Old Bakery Street, then St Lucy Street, before reaching the main street through Valletta: Republic Street. We were at the final 1km stretch now: we ran past the iconic St John Co-Cathedral, the National Museum of Archaeology, the New Parliament building designed by Renzo Piano (who is better known back in London for being responsible for the Shard) and out of the City Gate, where we suddenly found ourselves faced with a sea of commuters and language students, streaming out of buses and now marching towards us. Neither of us had ever had to run against a crowd before, so it was certainly a new (though not-so-enjoyable) experience. Thankfully, we managed to wade through the crowds and reach the Triton Fountain, from where we continued straight on, a final dash through a strip of garden called The Mall, before finally arriving back to St Publius Parish Church in Floriana.

We looked at the time: a little after 9:30. Perfect! Just enough time for a quick shower and breakfast, before catching the 10:45 bus to Mdina… 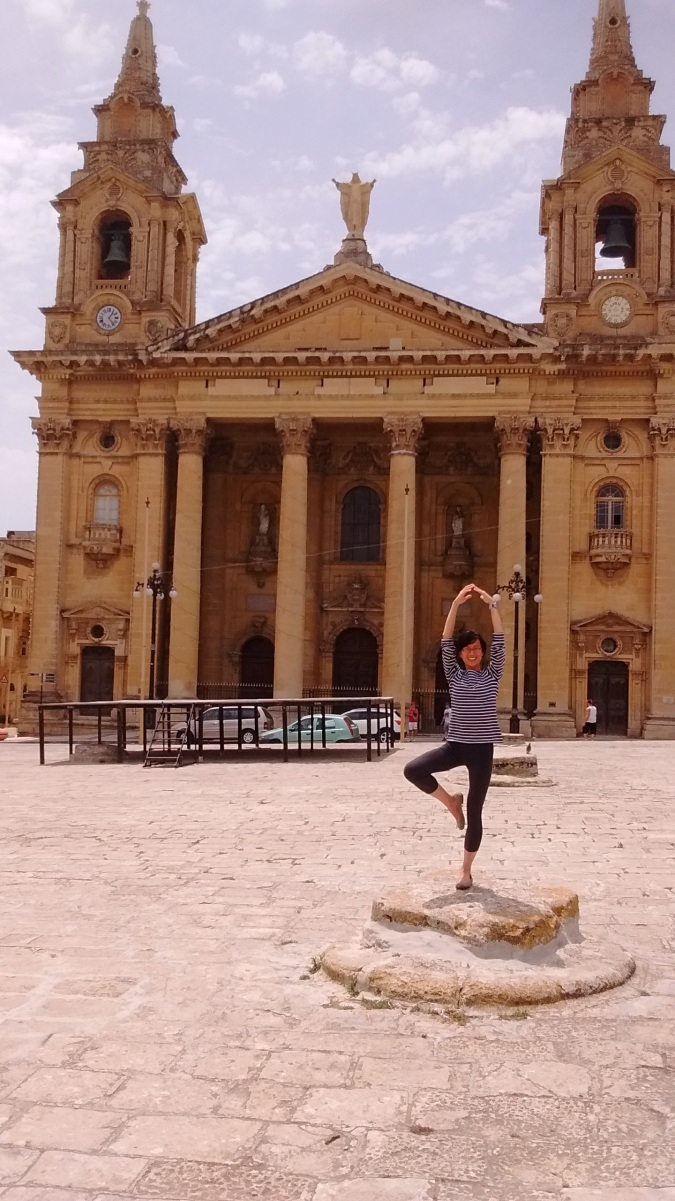 Sze Kiu messing about in front of the St Publius Parish Church. This photo was taken on the morning we arrived in Malta. We’d just had a beer and a burger in a cafe outside the church; evidently the beer had clearly gone straight to Sze Kiu’s head! NB: The church bells ring every 15 minutes, 24/7 (We know this because our apartment was a stone’s throw away from the church…)

Some final thoughts on our sight-jogging experience:

Note: We didn’t take our phones with us the day we did this run; the photos you see were all taken the day before / after.

A GPX file of the run can be downloaded from https://www.strava.com/activities/976298859